Mariafoot imported from France just recently (June) after running there in February and not only is she fit, with six workouts since June 1, she won her last race. That was a stakes race in a field of 10 on an all-weather surface. It was also on a counter-clockwise (left-handed) course just like in this country and it was at this mile trip. In the race she was close up early and surged at the end in a five horse blanket finish, showing a very nice will to win. Her sire has only had one horse run in the U.S. prior to her but it was a multiple stakes winning filly on the grass, Sandiva. The 96 Equibase figure from that race in France indicates she fits at the level as it’s the third best in the field.

Evil Lyn won by almost five lengths when last seen and is now a perfect three-for-three on turf. She beat three year olds and upward in that last race and faces three year olds only, a hidden drop in class although she is moving into stakes for the first time. Trainer Maker claimed (purchased) her for $40,000 and stands to make $90,000 if she wins and Maker is very good at claiming horses and turning them into stakes runners.

Alms is the likely favorite. She won the first four starts of her career but ran fifth of 13 with no excuse in her fifth career start. She may rebound to form good enough for a first or second place finish but there’s no guarantee. Still, she should be used in the exacta.

On the other hand, the other likely favorite, Walk In Marrakesh, is a horse I will be taking a stand against and not using on exacta tickets. Although she finished second in her first two North American starts after importing from Europe, those were in September and in March. In her two subsequent starts she ran poorly and even though it appears she had trouble in both races which cost her a better placing, my opinion after watching the replays of those race is she had no excuse.

Bets:
Win: Mariafoot and Evil Lyn win at odds of 5 to 2 or more.

Pick 3: (Two Tickets – Ticket One)
Race 4: Mariafoot, Evil Lyn, Alms
Race 5: Guarana, Mia Mischief, Bell’s the One
Race 6: ALL except leave off Smart Remark, Corruze & Shared Legacy (to save money and because they have very little chance to win)

Pick 3: (Two Tickets – Ticket Two – This one only uses Guarana in race 5 as she will be the prohibitive favorite so playing this ticket helps insure a profit if she wins)
Race 4: Mariafoot, Evil Lyn, Alms
Race 5: Guarana
Race 6: ALL except leave off Smart Remark, Corruze & Shared Legacy (to save money and because they have very little chance to win)

There’s only a little to write about regarding this race. Guarana, who opens at even money, is a legitimate favorite. She is already a grade 1 winner, having won the one-turn (mile) Acorn Stakes 13 months ago, and she returned off an eight month layoff in stellar fashion at this seven furlong trip, obviously a prep for this race for her second start back. She improved markedly in her second career start (the Acorn) and similar improvement second off the layoff makes her the one to beat, and everyone knows it.

Mia Mischief and Bell’s the One are the likely winners if Guarana fails. Mia Mischief is also a grade 1 winner, having taken the Humana Distaff last May. She’s two-for-three this year and although beaten at 3 to 5 last time out by Bell’s the One, she moves up a furlong and that could help her turn the tables on that on and possibly win as well. Bell’s the One won the Raven Run Stakes at this distance last fall as a three year old and came back after three months off following two poor efforts last month and surpassed the Raven Run effort taking the Winning Colors Stakes. She too is likely to improve second off a layoff, and, unlike Mia Mischief (who opens at 3 to 1 odds not good enough for a win bet), Bell’s the One opens at good odds of 8/1.

Every horse except Diamond Crazy may be used on exacta and trifecta tickets but the only way to really make a profit on those tickets is “If” Guarana doesn’t win of “If” longshots Wildwood Beauty, Princess Causeway or Unique Factor fill the second and/or third slots.

Pick 3: (Two tickets – ticket one)
Race 5: Guarana, Mia Mischief, Bell’s the One
Race 6: ALL except leave off Smart Remark, Corruze & Shared Legacy (to save money and because they have very little chance to win)
Race 7: Venetian Harbor, Bonny South, Envoutante

Pick 3: (Two tickets – ticket two, only using Guarana in race 5)
Race 5: Guarana
Race 6: ALL except leave off Smart Remark, Corruze & Shared Legacy (to save money and because they have very little chance to win)
Race 7: Venetian Harbor, Bonny South, Envoutante

Although the “ALL” button is used on pick 3 tickets involving this race, for intra-race play there are a few horses to key on. Two of them – Bound for Nowhere and Wildman Jack, open as co-favorites at 5 to 2. The other three are Just Might, Fast Boat and Totally Boss.

Wildman Jack won the Daytona Stakes in California at this trip and has won four of eight so fits on all counts. Bound for Nowhere shows up every time and won this race in 2018, then missed by a neck last year. Fast Boat, like Wildman Jack, just ran the best race of his career, as fast as Wildman Jack (115 figure to Fast Boat’s 116) and loves to win (7 for 17 on turf). Totally Boss won at the trip on the course last April when in top form (four wins and a nose loss in five races) then was VERY well regarded in the Breeders’ Cup Turf Sprint but had significant traffic issues. He returned to the races off a seven month layoff and again had big trouble. We have to draw a line through those two races and he put in a sparkling workout two weeks ago so he’s fit and ready. Just Might opens at a RIDICULOUS 50/1. He won a stakes at this trip on turf in February then finished second to a streaking multiple winner in Wellabled which NO horse was going to beat last month. I say ridiculous because he’s got at least a 15% chance of winning and even if I said 10% he should be 11/1 not 50/1.

Bets:
We’re not going to get fair odds (based on probability) on either Wildman Jack or Bound for Nowhere, so we can only profit if they win on exacta tickets and pick 3 tickets.

Win bets are warranted on Fast Boat and Totally Boss at 3/1 or more.
A win, place (and show if you like) bet should be made on Just Might at 6/1 or more.

Exactas:
Wildman Jack and Bound for Nowhere over ALL (these substitute for win bets) (Note: just like in the pick 3 you can leave out Smart Remark, Corruze & Shared Legacy (to save money and because they have very little chance to win)

In spite of the morning line, making Venetian Harbor the 6/5 favorites, there are NO STANDOUTS in this race. The only horse with little chance is Alta’s Award. The other five all can win BUT I question the will to win of Speech, who is also entered to run in Friday’s Beaumont Stakes. Speech has finished second in four straight, two to division leaders Swiss Skydiver and Gamine, BUT perhaps it was a case of “somebody had to run second” in those races and she’s a poor bet at 2/1. Venetian Harbor is potentially a “lone front runner” and that makes her very dangerous, but she was caught last out by Swiss Skydiver and although Prat is riding at Keeneland today, he loses the mount to Rosario. Joel rode her to her win in her second start when sprinting so knows her.

So obviously Venetian Harbor is a fairly legitimate favorite, but just like with the male division, there are horses who are still improving and it’s very possible one can take enough of a step forward today to win. Foremost among those is Envoutante, from the McPeek barn. It appears she’s been working in company with the queen of the barn, Swiss Skydiver, who runs later against males in the Blue Grass Stakes, and her last two workouts have been spectacular, first a 59.2 which was the third best of 48 then a 47.6 half mile which was the second best of 97. On form, Envoutante fits as well, having won easily at the distance last time out with a 96 figure, up from 91 the race before, but not as good as the 99 she earned around two turns for the first time. Jose Ortiz stays aboard and considering Venetian Harbor earned a 100 figure last out it won’t take much improvement for Envoutante to run well enough to post the upset.

Bonny South won the Fair Grounds Oaks when last seen with a 100 figure in a career-best effort. The concern is she hasn’t raced in three and one-half months compared to Envoutante and Venetian Harbor, who ran on 5/29 and 5/1, respectively. On the other hand, the trainer is Brad Cox, who does very well with horses in routes not needing preps off layoffs, so she must be considered a win contender.

Bets:
Win bets: Envoutante to win at odds of 5/2
“IF” Bonny South is about 7/2 or more at post time she can be bet to win as well. 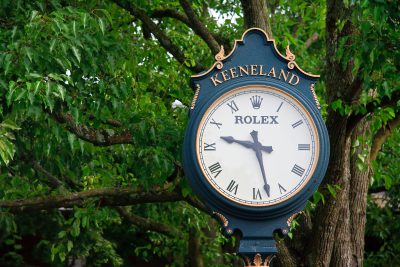 Can we pad the bankroll some more in The Raven Run? Last week we did a pretty nice job padding the Breeders’ Cup bankroll. If