This race quickly boils down to two strong contenders to win and one of them is not the second lowest odds on the morning line. Yaupon opens as the 8/5 favorite and is legitimate but Premier Star has a pretty decent probability to win as well. Long Weekend, who opens at 9/5, is a bit suspect on a lot of levels, foremost as even though he finished second via a disqualification in the Gold Fever Stakes at Belmont last month, after initially finishing third, he was never going to win and considering he was the 1 to 5 favorite that’s not good. The second issue I have with Long Weekend is he has ONLY won leading from start to finish, and there are others in the race which are unlikely to let him have an easy lead.

Yaupon won from off the pace in his June 20 debut then led from start to finish in his second start, last month at Saratoga. That was a visually powerful effort, in which he dueled for the lead and then drew off before being wrapped up late with gas left in the tank. Having a win over the track certainly helps his chances, as does the fact he is making his third career start and still getting stronger physically and mentally. Incidentally, the third place finisher from his debut has won twice since. Having earned a 95 Equibase figure in his debut then a 101 figure in that race last month, with Rosario aboard (who rides back), the sky may be the limit for this talented three year old.

Premier Star actually ran faster than Yaupon in his most recent race, earning a 106 Equibase figure. That’s the reason I can’t just use Yaupon on pick 3 and double tickets starting in this race. After winning his first two stars last December and January, Premier Star stretched out to two turns and ran rally poorly, beaten almost 30 lengths. His comeback four and one-half months later wasn’t much better but for different reasons as he bobbled at the start and managed to get fourth while well-beaten. With no issues in his most recent race on August 6, Premier Star has the potential to post the mild upset here if he repeats his last race and if Yaupon does not improve as expected.

I think Lexitonian has a slight edge in this year’s Forego Stakes. He has always shown promise since winning the Chick Lang Stakes on Preakness Stakes weekend last year, but then went on a five race losing streak. However, in one of those races, the Phoenix Stakes last October, Lexitonian ran good enough to win as he made the lead in the stretch and ended up just a half-length behind the winner and nose behind runner-up Whitmore. The losing streak came to an end in May when Lexitonian won an allowance race at Churchill Downs. Following that, his connections were so high on his chances he was entered in the Alfred G. Vanderbilt Handicap on July 25, but was scratched at the gate when another horse acted up and he sat down for just a moment. Shipping to California for the Bing Crosby Stakes on August 1, Lexitonian ran the best race of his career, earning a 116 Equibase Figure and rallying from sixth to miss by a nose at the wire. That 116 figure is the best last race in the figure and if Lexitonian can repeat the effort he can take home top honors in a very strong Forego Stakes field.

Chad Brown’s pair of Complexity and Fortin Hill could both be up to the task in the Forego. Both are four year olds who are lightly raced and enter the race off wins. Complexity, who has won four of seven starts, earned his most recent victory on July 2, duplicating the career-best 107 Figure he earned winning the Champagne Stakes in the summer of 2018. Making his second start following a six month layoff, Complexity appears likely to run even better. Fortin Hill has won three of four career starts and finished second in the other. He too just won off a layoff, with a decisive victory on July 4 following three months off. That effort earned a 106 figure and he too should improve in his second start off a freshening.

Honorable mention goes to a number of horses, particularly to Whitmore, who won the 2018 edition of the Forego. First or second in four straight stakes this year including when winning the Count Fleet Stakes with a 114 figure in April, Whitmore makes his second start following three months off and was in no way disgraced when second in the Vanderbilt Stakes over the track last month when second to rising star Volatile.

For the exotics I will absolutely use Win Win Win (opening at 12/1) and Majestic Dunhill (20/1). Win Win Win was second to Complexity last month and has won a couple of stakes in his career while Majestic Dunhill finished second (from 12th of 14 early) in the nearly identical General George Stakes last February, at 25/1, and may be passing a few of these late for a piece.

Bets:
Win:
Lexitonian at 3 to 1 or more
In the event (possibly unlikely because Chad Brown’s starters get bet down) Complexity or Fortin Hill goes to post at 7 to 2 or more they can be considered win bets as well.

Pace analysis: Mike Maker has three horses in the race – Aquaphobia, Marzo and Cross Border. The latter two are owned by Three Diamond Farms. When they both raced in the Bowling Green Stakes four weeks ago over the course, Marzo spurted out to a five length lead from the start then faded to fifth. The result was his stablemate Cross Border rallied strongly from fifth to miss by a neck before being moved up to first via disqualification of winner Sadler’s Joy. That tactic of sending one of the stablemates for the lead to set up the other, otherwise known as a “Rabbit” will likely be the same today. However, this time Maker’s Aquaphobia could be the beneficiary as well as Cross Border.

Then there’s the new face, Pedro Cara, who last ran in Qatar in February. He finished third of 13 in a $10 million dollar race at this 12 furlong trip and won the Group 2 Qatar Derby last December. Prior to that, Pedro Cara had ventured to the states, last September, running arguably the best race of his career in the Belmont Derby Invitational at this distance. In that race he made a big move from seventh to engage the leader with an eighth of a mile to go, then battled nose and nose down to the wire coming up a nose short at 38/1. This four year old absolutely loves this distance, having won last April in France, and as it’s likely the course is going to have some water given the forecast, having won on a good-to-soft course last year and with that big effort on a good course at Belmont last summer, there are no issues with him. He’s now in the barn of Graham Motion, gets John Velazquez to ride, and has been in steady training at Fair Hills so opening at 10/1 could be the KEY BET of the day.

Aquaphobia and Cross Border, as well as Sadler’s Joy are the other three main contenders to win. Aquaphobia won the Grade 1 United Nations Stakes last month at 11 furlongs and the extra furlong is no issue. Irad Ortiz, Jr. riding for Maker is a strong sign of another “A” effort. Jose Ortiz sticks with Cross Border, who he’s ridden to three wins (including in the Bowling Green) from five starts. Having missed by a neck in the 12 furlong McKnight Stakes in January and in top form coming into the race, Cross Border would be no surprise.

The win by Sadler’s Joy last month (although Dq’d) was his first in nine months since taking the Red Smith at 11 furlongs in November. He rarely gets there but considering he was a neck shy of winning the 2019 Sword Dancer I have to use him as a contender.

Bets:
Win:
Pedro Cara and Aquaphobia to win at odds of 2 to 1 or more. 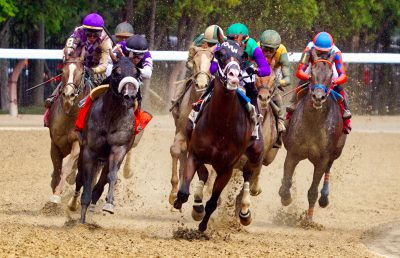