Before I get to this race, please note race 7 on a superb card at Woodbine is the Bold Venture Stakes with a post time of 4:14 eastern. My analysis for that race is available HERE on the Woodbine web site and includes double and pick 3 wagering strategies which lead into this Plate Trial Stakes.

Elusive Knight is one of three contenders and opens at the highest odds of the three (5/1) so has to be the key to profit in this race. We’ll also use Clayton (4/5 morning line) and Halo Again (9/5). Elusive Knight stretched out to two-turns in his third career start last year and missed by a half-length to Vanzzy, now a multiple stakes winner after taking the Jersey Derby last weekend. Rested and allowed to mature for six months, Elusive Knight finished second against older in a tough allowance race then ran into Clayton last out in another tough allowance. Sent off as the second choice at 5 to 2, Elusive Knight lost about two lengths at the break with a slow start then closed nicely to beat everyone but the winner. When Husbands saw there was no way to win, he wrapped up so Elusive Knight may have saved something for this race to go along with third off the layoff improvement. No matter how good Clayton appears to be, both he and Elusive Knight are trying nine furlongs for the first time and that’s where breeding comes in. By Ghostzapper, sire of Holy Helena, Gamble’s Ghost and Lift Up, all who have won stakes at nine to 10 furlongs, as well as 2018 Trial winner Telekinesis, Elusive Knight might improve mightily at the trip and post the mild upset here.

Halo Again won the seven furlong Queenston Stakes last month and as mentioned, Clayton won a classified allowance race at a mile and one-sixteenth. Halo Again might also have better breeding for the trip than Clayton as sire Speightstown was the sire of 2019 Oaks runner-up (by a neck) Bold Straight and the colt’s dam is out of Unbridled’s Song.

Silent Poet is a legitimate favorite, opening at 9 to 5 and likely to go to post at lower odds. However, the second and third betting choices (Delaware and March to the Arch) don’t have the probability to win suggested by their odds. Delaware opens at 5 to 2 because Chad Brown trains but his runner-up effort in allowance company at Belmont last month doesn’t appear to be good enough to win here if repeated or even if slightly improved upon. March to the Arch may be a one trick pony because his only win since the G2 Wise Dan in June, 2019 was in a statebred stakes.

On the other hand, Silent Poet hasn’t run a bad race on turf. Well, maybe one, as he has won seven of 11 and finished second three times. Entering the race off two sharp wins on the course and with the ability to win on the lead or from off the pace, he’s already won at this level, taking the Play the King last August and his works since raced are top notch.

Admiralty Pier has a slight shot to upset and a big shot to finish second just as he did behind Silent Poet in the Connaught Cup Stakes on 7/11, a grade 2 stakes like this one. That was his first race of a four month layoff so he’s definitely got improving to do and he won the Tampa Bay Stakes last previously so he’s a two-turn stakes winner on turf.

Mr Ritz is a nice horse but I don’t think he’s as good on turf as on the main track. Nevertheless I’ll use him in second and third on trifecta tickets. Likewise, Dream Maker was coming back from 14 months off last month when battling on the lead for the first mile then fading to fourth and could be tougher second off the layoff, plus really isn’t a need the lead type and is a full brother to Dream Dancing, who won nearly a half-million dollars and a couple of stakes races on turf.

Curlin’s Voyage is the one to beat, having won four of eight including the Fury Stakes last month. That seven furlong trip was a great prep for going two turns, particularly as the only other time she stretched out to two turns she won by almost five lengths. There’s no question she can get the distance as sire Curlin gave us Dixie Moon, winner of the 2018 Oaks. Flattered when the runner-up came back to win and on a sprint-sprint-route pattern for improvement, plus with the ground saving rail, Curlin’s Voyage looks very tough here, and potentially a low odds overlay opening at 3 to 1.

The actual morning line favorite is Lasting Union at 5 to 2 and I find it odd although I understand. She won by 12 last out around two turns, at Delaware, in an allowance race. Her breeding for all-weather is so-so at best and trainer Matz hasn’t had any horses run well on all-weather in the last few years. The 93 Equibase figure is on par with the 93 Curlin’s Voyage earned last out so it’s nothing special. All in all I’m taking a stand against her.

Instead, Mizzen Beau (12/1 starting odds) and Infinite Patience (6/1) are playable, at least underneath Curlin’s Voyage in exotics and also for a few bucks as win bets. Mizzen Beau finished fifth behind Curlin’s Voyage in the Fury, a pretty even prep for going long. She won around two turns in March with a 90 figure so isn’t far off the top contenders here in terms of her best effort. The fact she had a race over the track could be of benefit as well. Infinite Patience has won five of six in her career and finished third in the other, last month when beaten just a length in the Fury Stakes. That was her first start back from nine months off so there’s improving to do and she has hidden breeding for this trip so could be a factor from start to finish.

Nownownow Stakes – Race 11 at Monmouth – Post Time 4:53 PM Eastern You may never have heard of this race but it’s very significant

Lake Placid Stakes – Race 8 at Saratoga – Post Time 4:26 PM Eastern Please forgive my digression before getting into the handicapping for this 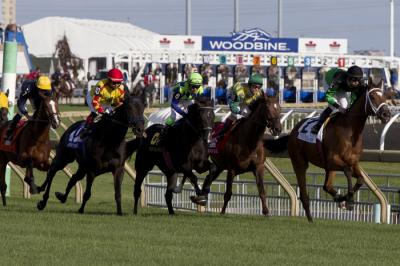