The Preakness didn’t really lose any luster when the connections of Derby winner Rich Strike decided to pass the race. They picked up budding star filly Secret Oath the Derby runner-up Epicenter. Add a few new shooters and we have a nice and competitive second jewel of the Triple Crown races. Obviously, we won’t have a Triple Crown winner this year but those are supposed to be few and far between anyway.

Let’s look at the field and see how the race shapes up.

Simplification is a talented horse, and he tries every time. He has transitioned from a speed horse to more of an off the pace runner after he broke slow but ran well in the Holy Bull. His race in the Derby might be a bit flattered by the pace scenario. He also looks to be a cut below the better ones in here. He has the rail and Johnny V, two positives but not enough for me to think he will win this.

Creative Minister has the look of a live long shot. He lacks seasoning but has talent and has been highly regarded since he got to the McPeek barn. The owners put up 150K to supplement him in, and I can’t fault them for taking a shot. He is not my top choice, nor will I use him but he would not surprise me if he is this good.

Fenwick appears to be looking for a participation trophy as opposed to the prized Woodlawn Vase. He would be as big a surprise as Rich Strike was, and Rich Strike probably had a better chance going into the Derby than Fenwick does here.

The filly Secret Oath has a lot of talent, a lot of hype and will get plenty of support. She made two big moves in her last two races. In the Oaks it was good enough and then some. In the Arkansas Derby she could not sustain it after a troubled start. Two tough races and now coming back in two weeks and not getting a pace set up that will favor her style. A big ask. If she wins, she is really good. Really really good.

Chad Brown skipped the Derby with his lightly raced and fast Gun Runner colt Early Voting. Chad always does what is best for his horses’ long term and it pays off more often than not. Chad has stated he thinks Early Voting may be even better with a target to run at. That could be true, but we may not find out Saturday. Jose can do what he wants with this colt and can get the lead if that is his plan. If he does the race could be for second and we may see Cloud Computing part two. If he sits off possibly Armagnac and Chad is right, we may get the same result.

Happy Jack adds blinkers after making no noise in the Run for the Roses. Are they enough? I did not think so either.

Epicenter is absolutely the one to beat. He has proven to be a serious racehorse, and many feel he ran best in the Derby moving into that fast pace. He can be very versatile, and Joel may show more speed than people think which may move the filly up. I don’t think so however, and I think he will try and stalk and rally again. He is the one everyone should be concerned with in the stretch. The only knock is he is coming back quick off a hard race.

Skippylongstocking should get a good trip just off the speed and getting the jump on any deep closers. Maybe he gets a piece, but I don’t think he can win it.

Enjoy the Preakness. It should be an exciting race.

Flavien Prat will ride two horses in two stakes at Belmont Park on Saturday that were both ridden by Irad Ortiz last out. He will 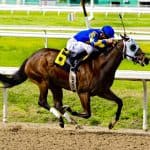