An Early Look at the Grade 1 Ricoh Woodbine Mile 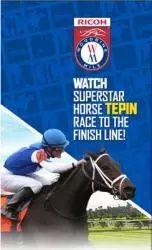 Robert Masterson’s Tepin, currently based at Saratoga in New York, put in her final work for Saturday’s Woodbine Mile this morning covering four furlongs in :49.71 on the turf training track.

“Today was an easy half-mile. All her big works have been completed and this was just a maintenance type work. We didn’t put her in company. Her regular exercise rider worked her,” said assistant trainer Norm Casse. “It was a typical work for Tepin. She went off a little slow and we asked her to finish around the quarter pole. She flew home and got the last quarter in :23 flat. From the wire to the 3/4-pole, I got her in :12 and change, so she was actually galloping out better than she was working. I was really encouraged by the work.”

Tepin, a five-time Grade 1 winner and the Eclipse Award champion grass mare of 2015 known as the ‘Queen of the Turf’, brings a seven-race win streak into the Woodbine Mile.

She will train at Saratoga on Wednesday morning and then van north to Toronto where she will look to build on a winning streak that most recently saw Tepin capture the Group 1 Queen Anne Stakes, at Royal Ascot.

“It’s going to be hard to replace the feeling we had when she won at Royal Ascot, said Casse. “Once she started getting closer to going over there and she got that international mandate, I realized how exciting it was going to be and how much of a star she was becoming overseas and how important horse racing was there.

“To go over there and win one of their most important races was special,” continued Casse. “The only way we could ever top that feeling again would be to win the Kentucky Derby. It’s one of those fleeting moments. It’s like an out-of-body experience and I wish we could bottle up the feeling we had when she won at Royal Ascot.”

Casse, a graduate of Bellarmine University in Louisville, took out his assistant trainer’s license in 2006 and spent a number of years at Woodbine before moving on to train his Hall of Fame father’s horses in the U.S. at Churchill Downs, Fair Grounds, Gulfstream, Keeneland and Saratoga.

He’ll be returning to Woodbine for the first time since 2011 to help Tepin with her final preparations for Saturday’s $1-million test.

“I’m really excited about the possibility of winning the Woodbine Mile. It’s a race that has eluded Dad so far,” said Casse. “When we brought her back this year, one of our main goals was to come back and win what I think is Woodbine’s marquee race. I’m really looking forward running her there.”

Tepin is certain to go to post as the mutuel favourite in the expected eight-horse field as she tries to join the ranks of past superstars who have captured the Woodbine Mile include Wise Dan, Leroidesanimaux and Ventura, the only filly to have won the prestigious event.

Wise Dan, sent to post as the prohibitive 1-5 favourite in the 2013 edition of the Woodbine Mile, zipped to victory in a track record time of 1:31.75 with John Velazquez on board.
“I don’t know if we’re out there to break a track record. She’s ready to run her race and I think she’s going to be tough to beat,” said Casse. “When she brings her ‘A’ game, she’s always tough to beat. We want this one and then we’re looking forward to the Breeders’ Cup after that.”

One thing for certain, Tepin will certainly attract the attention of both fans and media when she arrives at Woodbine on Wednesday.

“She’s a superstar and she embraces it,” said Casse. “She soaks up the media attention and likes the fans to come and see her. She was anointed the ‘Queen of the Turf’ by Travis Stone when she won at Churchill Downs on Kentucky Derby day. You’ll see when she arrives. She knows she’s the queen.”

MR. OWEN RETURNS FOR SECOND CRACK AT THE MILE

Qatar Racing Limited, who captured the 2014 edition of the Woodbine Mile with Trade Storm, will look to add to their trophy cabinet on Saturday with the improving four-year-old colt Mr. Owen.

Trained by Francois Rohaut, the bay son of Invincible Spirit is out of Mrs. Lindsay who captured the Grade 1 E.P. Taylor Stakes for Rohaut and owner Bettina Jenney in 2007, at Woodbine.

Mr. Owen finished sixth in last year’s Woodbine Mile, won by Mondialiste, which was competed over a yielding turf.

The talented bay has hit the board in two of three starts this season, finishing third in the Group 2 Prix du Muguet at Saint-Cloud and most recently came second in the Group Prix Messidor at Maisons-Laffitte. Both of those events were taken by Vadamos, who captured the Group 1 Qatar Prix du Moulin De Longchamp on Sunday, at Chantilly.

“His last race was very good and even if he couldn’t rivalize with Vadamos, he showed that he was on the way to his best form,” said Rohaut. “He is in good form. He worked last Monday and yesterday and we are very happy with him.”

Mr. Owen performed well in the 2015 Mile despite racing over an unfavourable wet turf.

“Last year when he ran the Ricoh Woodbine Mile, he found a soft ground he doesn’t appreciate and it was probably a bit hard for a three-year-old against good older horses,” said Rohaut. “Mr. Owen is a very good looking horse, much stronger than last year. I hope his experience of last year will help him to give his best on Saturday. The result will also depend on the ground. He prefers good to firm going to give his best.”

Jamie Spencer, who piloted Trade Storm to victory in the 2014 Mile, has the call on Mr. Owen.

WOODBINE MILE TO BE BROADCAST LIVE ON TSN2