Kentucky Derby winner Nyquist will compete in the Haskell 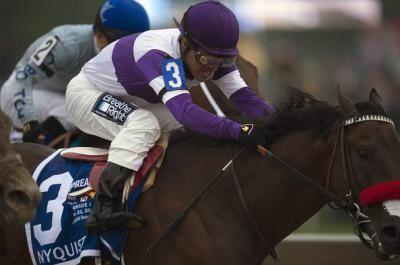 Oceanport, N.J. – The connections of Nyquist, winner of the Kentucky Derby, confirmed they will run their champion next in Monmouth Park’s $1 million betfair.com Haskell Invitational on Sunday, July 31.

“We’re headed to New Jersey,” said Doug O’Neill, trainer of Nyquist. “He very much impressed us this morning with his work. Mario (Gutierrez) was aboard and he looked really solid. We’re pumped up and can’t wait to get to New Jersey.”

That work was a snappy :59 flat over the Santa Anita Racetrack, best of 23 that went five furlongs this morning.

“He’ll ship down to Del Mar and train there,” O’Neill said. “We don’t have specific shipping plans just yet, but we’ll work that out over the next week or so.”

A colt by Uncle Mo, Nyquist won his first eight career starts for Reddam Racing LLC before finishing second last out over a sloppy track in the Preakness on May 21. He secured champion 2-year-old honors with his victory in the Breeders’ Cup Juvenile and this year sports wins in the San Vicente Stakes, Florida Derby and Kentucky Derby. The betfair.com Haskell will mark his tenth trip to the post and fifth in 2016.

“We’re very grateful to Paul and Ziillah Reddam and Doug O’Neill on their decision to run Nyquist in the Haskell,” said Bob Kulina, president of Darby Development LLC, operators of the racetrack. “The Haskell has always been the race where champions prove their greatness and the addition of Nyquist to the field will ensure that fans see another fantastic renewal of New Jersey’s biggest horse race.”

The Grade 1 betfair.com Haskell, which last year drew a record of crowd of more than 60,000 to see Triple Crown winner American Pharoah, is contested at a mile and eighth. Throughout its history, equine participants in the betfair.com Haskell have won 39 Triple Crown races, nine Horse of the Year trophies and seven Breeders’ Cup Classics.