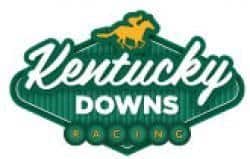 FRANKLIN, Ky. — A total of 189 horses were entered Wednesday for Saturday’s 10-race opening card at all-turf Kentucky Downs — with nine races luring a capacity 12 horses or more, including three out of four stakes.

The stakes are each worth $350,000, which includes $200,000 of purse supplements from the Kentucky Thoroughbred Development Fund for horses born in the commonwealth and sired by a Kentucky stallion. The lone race not to get at least a dozen was the Kentucky Downs Ladies Sprint, for which nine fillies and mares were entered.

The 2-year-old maiden races, carrying purses of $130,000 for Kentucky-breds, figured to be popular — and sure were. A total of 49 two-year-old fillies were entered for the 6 1/2-furlong race. In addition to the 12 in the body of the race, there are four horses listed as “also-eligibles” who can run if there are any defections by scratch time, which is 9 Central Friday morning.

“Almost pitching a no hitter on opening day sets the tone for a great meet,” said Corey Johnsen, Kentucky Downs president and part-owner of America’s only European-style racecourse. “It’s very gratifying to see the support of the horsemen, and I applaud racing secretary Tyler Picklesimer and his crew for doing a great job. The only way you get numbers like these is with all participants in the industry working together.

“I can’t wait to see the next four cards after this.”

Here’s a quick look at the stakes:

Kentucky Downs Ladies Turf: The favorite could be Cash Control, who has been in superb form in five grass races. She started off with a head victory over Ladies Turf entrant Mizz Money in the Fair Grounds’ Daisy Divine, was second by a nose to Mizz Money in the New Orleans Ladies, third in Churchill Downs’ Grade 2 Distaff Turf Mile (the winner was international star Tepin), won Churchill’s Grade 3 Mint Julep by a head over future stakes-winner Sweet Acclaim, and most recently was second by a neck in the Indiana General Assembly Distaff.

The field for the mile race also includes She’s Not Here, who won Del Mar’s Yellow Ribbon (G2) for the second straight year; Secret Someone, a rallying fourth in last year’s One Dreamer at Kentucky Downs and winner of the $100,000 Lady Canterbury; Susie Bee, a multiple stakes-winner in Florida. Stormin Elle — winner of three of her last four starts, including a stakes restricted to Illinois-breds — was supplemented into the race for $7,500.

Kentucky Downs Juvenile: The Steve Asmussen-trained Prados Way is 2 for 2, having won a stakes in New Mexico. Raising Rumors, trained by Randy Morse, is 2 for 3 after capturing the Prairie Gold Juvenile in Iowa. Neither has competed on grass, however, and they’ll face some good-looking turf maiden-winners such as Saratoga debut-winner Ancient Warfare, the late-running Parlor and Preemptive Strike.

Kentucky Downs Turf Sprint: Regally Ready is a past Breeders’ Cup Turf Sprint winner and $1.8 million-earner, while Undrafted has made $1.2 million, including Ascot’s Group 1 Diamond Jubilee in England last year. The competition includes classy horses such as California invader Toowindytohaulrox, Hogy and Island Town in his turf debut.

Exacta Systems Juvenile Fillies: Caroline Test figures to be favored off finishing a good second against boys in the Ellis Park Juvenile. She hasn’t run on turf, but is from an outstanding grass family. Safe With Me ran fast to win her debut on turf at Saratoga. Lull won her first race with ease over the Belmont grass, then clipped heels and fell in a stakes at Saratoga.