by Ray Cotolo, for Red Mile 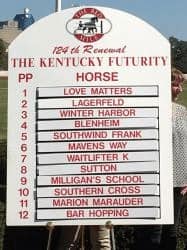 Yonkers Trot-winner Marion Marauder will attempt to be the ninth champion to claim the Trotting Triple Crown amid a stakes-packed card to close out the Grand Circuit meeting at Red Mile on Sunday (Oct. 9).

The draw for the 124th Kentucky Futurity was conducted during Red Mile’s Thursday afternoon program. A field of 12 is slated to go in a single dash for $431,000, carded as race 12 on a 14-race program. Marion Marauder, by Muscle Hill out of the Donerail mare Spellbound Hanover, drew post 11.

“It’s not [a great draw], but it should be a great race for the fans,” Scott Zeron, Marion Marauder’s driver, said. “I hope I can drive a nice race and have a little luck. I think I have the horse that can win it, I just have to make sure I drive him that way.”

“I would trade places with literally anyone else,” Zeron said jokingly on the draw. “[Jimmy] Takter’s [has the] one, two, and twelve, so not only am I boxed in at the beginning, but I’m boxed in by the Takter crew, too. It’s going to take some nifty stick-handling.”

The Kentucky Filly Futurity goes as two heats, with two eliminations set for the first heat. Heat two will go for $218,400 and is the final race on the program.

Broadway Donna goes for redemption after breaking in a $62,400 Bluegrass split as the 1-5 favorite. Owned by Fashion Farms LLC and trained by Jim Campbell, the Donato Hanover filly, out of the Broadway Hall mare Broadway Schooner, Broadway Donna starts from post one. She has won 12 of 18 starts, earning $800,894.

Ginny Weasley, the Andover Hall filly out of the Donerail mare Donepunk who won a Bluegrass split in 1:53.1, neighbors Broadway Donna from post two. Ake Svanstedt trains the winner of six races in 19 starts, earning $128,563 for owner Torp Trotting Inc.

Celebrity Eventsy will try to rebound in the second elimination. Finishing fifth as the 2-5 favorite in a $62,400 Bluegrass division, trainer Staffan Lind sends the daughter of Manofmanymissions, from the American Winner mare Little Ms Queenie, from post four for owner Celebrity Farms. A winner of eight in 22 starts, she has earned $456,803 in her career.

She competes against Side Bet Hanover, by Donato Hanover out of the Muscles Yankee mare Sea Level Hanover, starting from post three. Jonas Czernyson trains for owner Srf Stable. Winning five of 18 starts in her career, she has compiled $175,336 in earnings.

Pacing fillies will congregate for two divisions of the $213,500 Glen Garnsey Memorial.

Off a second-place finish to Darlinonthebeach as the 4-5 favorite in 1:50.2, Pure Country races in the first division. The Jimmy Takter-trained daughter of Somebeachsomewhere, out of the Western Hanover mare Western Montana, has won 17 of 27 starts and earned $1,596,948 for owner Diamond Creek Racing. She races from post six.

Darlinonthebeach, by Somebeachsomewhere out of the Bettor’s Delight mare Darlin’s Delight, races from post seven in the second division for trainer Nancy Johansson. A winner of 11 in 27 starts, she has earned $776,823 for owner White Birch Farm.

Sophomore pacing colts and geldings were divided into two divisions for the $416,000 Tattersalls Pace.

Division one draws Check Six, Western Fame, and Lindy Beach, all of whom are entering off wins in the Bluegrass. Check Six, by Somebeachsomewhere out of the Artsplace mare Southwind Vanna, won his $57,300 Bluegrass division in 1:50 as the even-money favorite. Winning 12 of 26 starts, he has earned $903,804 for owners Burke Racing Stable, Weaver Bruscemi, William Switala & Joe Martin. Trainer Ron Burke sends him from post six.

Western Fame, winning a $58,300 Bluegrass division as the 2-5 favorite in 1:50.3, starts from post seven. Trained by Jimmy Takter, the colt by Western Ideal, from the Artiscape mare Shyaway, has won five of 22 starts, earning $316,156 for owner Brittany Farms.

Trying for his fifth-straight win this season, Lindy Beach, off a 1:50.3 win in the Bluegrass, races from post nine. By Somebeachsomewhere out of the Real Desire mare Real Appealing, he has won four of 13 starts, earning $64,912 for owners Lindy Farms of Connecticut and Frank Baldassare and trainer Frank Antonacci.

Racing Hill, after scratching from the Little Brown Jug, headlines the second division from post seven. Trained by Tony Alagna, the colt by Roll With Joe, from the American Ideal mare Chasing Ideals, finished third in the first heat of the Little Brown Jug in a 1:50.1 mile. With wins in the $500,000 Messenger Pace and $400,000 Adios Pace, he has 10 victories to his credit in 22 starts, earning $1,358,876 for owner Tom Hill.

Tony Alagna also trains American Passport, by American Ideal out of the Four Starzzz Shark mare Star Of The Show. He draws post two after nearly going wire to wire in his Bluegrass split, instead finishing second by three-quarters of a length to Check Six. A winner of five in 25 starts, he has earned $298,016 for owners Brittany Farms, Riverview Racing, Alagna Racing, and Jody Siamis.

The older racing divisions will also compete in their respective splits of the Allerage Farms stakes.

Older pacing fillies and mares will contest in the $100,000 Allerage Farms Stakes. Division speedster Lady Shadow races from post two off a 1:50 win in the $236,360 Milton Stakes. The mare by Shadow Play, out of the Camluck mare Lady Camella, has won 25 of 51 starts, earning $1,354,042 for owners David Kryway, Carl Atley, Edwin Gold and the Bfj Stable.

The $101,000 Allerage Farms Open Trot attracts Obrigado as he readies for the $1,000,000 International Trot at Yonkers Raceway. Recently winning the $160,00 Dayton Trotting Derby in 1:53.2, Obrigado will start from post three. Trained by Paul Kelley, the gelding by Boy Band, from the Malabar Man mare Malimony, has won 40 of 76 starts, amassing $1,362,019 in earnings for owners Paul Kelley Racing Stable, Srf Stable, Linwood Higgins and Stable 45.

With the announcement that Always B Miki will stand at Diamond Creek Farms in 2017, the all-time world record could be at stake in the $138,000 Allerage Open Pace. By Always A Virgin out of the Artsplace mare Artstopper, Always B Miki, a winner of 26 in 49 starts, has dazzled across the country all season and has demonstrated a talented amount of speed. With a mark of 1:47 at Pocono Downs taken in both the elimination and final of the Ben Franklin and then equaled in the $225,000 Jim Ewart Memorial, Always B Miki has earned $2,227,368 for owners Bluewood Stable, Roll The Dice Stable, and Christina Takter. The 5-year-old will start from post three.

Post time for the final day of the Grand Circuit fortnight at Red Mile is set for 1:00 p.m.