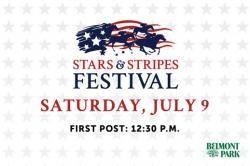 A full field of 13 three-year-olds running for grade one honors and the winner’s share of the $1.25 million dollar purse in a firecracker of a race the Belmont Derby.

Brexit has not tempered the Euros from shipping over three horses including the morning-line favorite Long Island Sound (7-2). From the stable of trainer Aiden O’Brien, Long Island Sound makes his US debut after running third in a Group 3 Tercentenary Stakes at Ascot. That was his first race going a route distance as his three prior races were winning ones at the flat mile. By War Front, out of a Pulpit mare, I can see why O’Brien stretched him out in distance.

While Long Island Sound is a deserving favorite, I actually favor the other O’Brien trainee in Deauville (4-1). By the world class sire Galileo, Deauville was nowhere to be found in the Group 1 Investec Derby when he was beaten by 21 lengths. However, that race was run on extremely soft ground, which he may have not taken to. I will excuse his performance in that race and use him as one of my “A” selections . His resume is impressive with four exacta finishes in six career starts at the Group 2 and 3 level in Europe.

While the European stock is strong, I also like several of the American runners and will be using all of them in my multi-race bets. Camelot Kitten (5-1) is also an “A” selection and is two for two since Brown put the blinkers on him. He has an affinity for the Belmont as both his starts at the track have produced wins. The mile and quarter distance of today’s race is his only question mark. By Kitten’s Joy, the top side of his pedigree spells distance but his dam sire was Forestry and historically that leans more towards sprint than classic distances. That being said, the Kitten is his own cat and he looks live in this race.

Highland Sky (8-1) is usable in this race. Trained by Barclay Tagg, the Sky Mesa colt finished second to Camelot Kitten last time out in the Grade 3 Pennine Ridge at Belmont Park. Watching the replay, I noticed he was on his wrong lead for half the stretch drive before switching over and then surging to get beaten by just a neck. I would expect the extra distance of today’s race to help his cause and you get a square price at 8-1.

As for my value horse, and one that I will use prominently on all my tickets, I landed on Airoforce (10-1) for the Casse barn. I have been waiting for this son of Colonel John to return to the form he showed last year when he won three of four starts and finished second-beaten just a neck in the Breeders’ Cup Juvenile Turf. While the dirt experiment did not work to begin the year, I caught a glimpse of the old Airoforce in his last race when he ran second to his Breeders’ Cup stablemate in the Penn Mile. His gallop out was huge and I’m hoping that was the sign that his afterburners are ready to fire.

There is early speed in this race with Toughest ‘Ombre (30-1) and Beach Patrol (12-1), and I think Airoforce’s best performances come when he is able to rate off the pace. If Leparoux can get him to relax then I can see him pulling the upset and like his namesake: Fly, Fight, Win.

If you’re playing the trifectas and/or superfectas, I would spread as much as your budget allows because contention runs deep.