The Fall Four at Woodbine 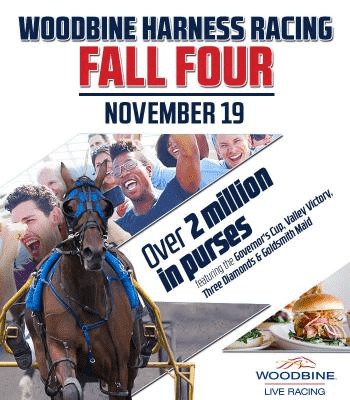 TORONTO, November 15 – The 2016 Woodbine Entertainment Group (WEG) stakes season will come to a close Saturday night at Woodbine Racetrack with nearly $1.8 million on the line in the Fall Four.

The Governor’s Cup, Valley Victory, Three Diamonds and Goldsmith Maid will see many of the finest two-year-olds in the sport attempting to finish off their rookie season in style.

The richest event of the Fall Four is the $520,000 Governor’s Cup, which features a field of 11 pacing colts and geldings. Two of the fastest two-year-olds in harness racing history, Downbytheseaside and Huntsville, will go toe-to-toe in Saturday’s main event.

Huntsville is coming into the Governor’s Cup off a sensational 1:49.1 Breeders Crown victory on October 29.

The Ray Schnittker trained colt has won seven of 10 starts this season, including the Pennsylvania Sires Stakes (PASS) Championship and a pair of Grand Circuit events at The Red Mile.

Downbytheseaside has done his best to stay out of the shadow of Huntsville, despite finishing second to his rival on three different occasions, including the PASS Championship and Breeders Crown._Downbytheseaside.jpg

The Brian Brown trained colt has won seven of 12 starts this season. With no eliminations for the Governor’s Cup, Downbytheseaside tuned up for Saturday’s contest with a winning qualifier last Friday at Dayton Raceway.

The parallels between Huntsville and Downbytheseaside’s rookie seasons run deep.

Both are sons of Somebeachsomewhere, both have seven victories this season, both have followed almost identical schedules and both have victories over each other, with Hunstville holding a three to one advantage.

However, the deepest connection that will long be remembered between the two standouts is October 8, 2016 at The Red Mile.

On a breezy fall afternoon in Lexington, Huntsville and Downbytheseaside each captured a division of the International Stallion Stake and both did so by equaling the World Record of 1:49.

Huntsville and Downbytheseaside is becoming one of the hottest rivalries in the sport and anticipation is already building for potential classic showdowns next season.

However, one final two-year-old battle looms for the superstar rookies and it only seems right that they will lineup side by side in the Governor’s Cup.

While the two big dogs in Saturday’s Governor’s Cup will have a close eye on each other, they will also have their hands full with their nine other rivals, which includes Breeders Crown third-place finisher Miso Fast, Kindergarten winner Air Strike and Dream Maker Series winner Bettors Dream.

The Governor’s Cup certainly has the makings of a potential classic, but the three other Fall Four events are also loaded with talent.

Idyllic Beach bested Someomensomewhere in last Friday’s elimination by just a neck, while Caviart Ally came through with a strong effort to take the other split.

Someomensomewhere has won three of her last five going into Saturday, while Idyllic Beach is undefeated in three starts north of the border.

The $404,000 Valley Victory for two-year-old trotting colts and geldings could be the scene of a “Snowstorm”.

Ron Burke trainee Snowstorm Hanover turned in a dominating effort to win his elimination last week in 1:55.1. The son of Muscle Massive is red-hot going into the Valley Victory final with back-to-back wins, including a victory on November 3rd in the Matron at Dover Downs.

Local standout Jake will look to get in the way of Snowstorm Hanover. The Luc Blais trainee captured his elimination last week in 1:55.4 and has never finished out of the money in nine career starts.

Similar to the Governor’s Cup, the Goldsmith Maid for rookie trotting fillies did not require eliminations. A competitive field of 10 is scheduled to compete for $447,000.

Princess Aurora has quietly earned $212,676 in the shadow of stablemate Ariana G this season, but with no Ariana G in the Goldsmith Maid, the Jimmy Takter trained filly will have a chance to grab the spotlight Saturday.

Princess Aurora has three victories this season and has hit the board in eight of 10 outings.

Saturday’s card will be the final million dollar card of the 2016 North American harness racing season, which has seen many classic moments. With nearly $1.8 million up for grabs in the Fall Four, more signature moments will be added to the 2016 yearbook.

Below are the full fields for the Fall Four Finals.