Emaaraty Ana, A Case of You, Extravagant Kid and Lieutenant Dan are the contenders to win this race.

Just a cut below the four contenders listed above are Fast Boat, Gear Jockey, Kimari, Golden Pal & Glass Slippers and I wouldn’t argue against their inclusion on exacta, trifecta, pick 3 or 4 tickets, or even win bets at double digit odds.

Emaaraty Ana has run the three best races of his career, starting with a big win three back at the end of July at this five furlong trip on grass where he led for the last furlong and drew off to a two length win. Moving up significantly in class, Emaaraty Ana ran against 13 other horses in the Group 1 Nunthorpe Stakes, with a $500K purse, at the same trip and finished second. Next came a career-best effort in the 11 horse Betfair Sprint Cup (with a $380K purse) in September in which he made the lead with a furlong to go and held on gamely by a nose. Those last two efforts earned 124 and 126 equivalent Equibase Figures which are identical to the 123 figure 2020 Breeders’ Cup Turf Sprint winner Glass Slippers earned in the Prix de l’Abbaye, also at five furlongs, right before her victory last year. World class jockey Azteni, up for those last two efforts, rides Emaaraty Ana back and this five year old may take some beating and is a great bet to win anywhere near his starting 5 to 1 odds.

Extravagant Kid has had a sensational career to date, winning 15 times and finishing second in 17 other races from 53 starts. He does have more runner-up finishes than wins but he shows up every time. He went to Dubai this spring and beat 12 horses to win the Group 1 Al Quoz Sprint with the same top 123 figures Emaaraty Ana and A Case of You earned recently. After third and 14th place efforts in England, he took three months off and returned to good form closing for second to wire-to-wire winner Golden Pal last month in the Woodford Stakes. With Golden Pal unlikely to get an easy lead in this race like he had last out, Extravagant Kid should be passing many of these late and I like the fact he is reunited with Ryan Moore, who has only ridden him once and that was to his strong win in the Al Quoz Sprint in March.

Lieutenant Dan has turned into one tough competitor since trying turf sprinting in March, 2020. He won a Cal-Bred stakes that day then finished second at a mile before something sidelined him for 13 months. Since coming back in July of this year, Lieutenant Dan has won three straight turf sprints, including the Green Flash Handicap at this trip on the Del Mar turf. He does run close to the lead but he’s not a need-the-lead type and with a 118 figure very close to the best in this field to run back to from the Green Flash, he should be regarded when considering our wagers involving this race.

Emaaraty Ani and A Case of You to win at odds of 3 to 1 or more.

I will also consider win bets on Extravagant Kid at 4 to 1 or more and on Lieutenant Dan at 9 to 2 or more.

Personally, I will likely be betting the two (from the four above) which are the highest odds near post time.

Box Emaaraty Ana, A Case of You, Extravagant Kid and Lieutenant Dan.

Ginobili, Silver State and Life is Good are the main win contenders in this race.

Life is Good is going to use his speed, as he always does, from the start. He’s NEVER not (sorry for the double negative) been first at any point in the first half-mile and, similar to other horses with this type of running style who are very talented (like Letruska and Knicks Go later on the card) if another horse takes him on they’re only compromising their own chances, and if they leave him alone they’re giving him exactly what he wants. However, Eight Rings, from the Baffert barn, is likely to try NOT to let Life is Good get that easy lead, which puts Ginobili in the perfect stalking spot just as he was in the Pat O’Brien Stakes when last seen this summer at Del Mar. That was his second race in blinkers, and the other just before it was even better, and at this two-turn mile trip where he drew off to win by almost 10 lengths to earn a 113 Equibase figure. That was as fast as Life is Good has run in all but ONE of his five races. Life is Good earned a 118 figure winning the Jerkens on the same day Ginobili was winning the Pat O’Brien, and both were ONE TURN races. The two times Life is Good led from start to finish around two turns were in January winning the Sham and in March winning the San Felipe and Baffert was his trainer then, not Pletcher. I’m not saying Life is Good will stop, or get caught, but if the Jerkens effort on 8/28 is any indication, when he was run down by Jackie’s Warrior, who had stalked him in second, then Ginobili can run the same race as Jackie’s Warrior did in the Jerkens and run Life is Good down near the wire.

Silver State comes from further back and is a Grade 1 mile winner, having taken the Met Mile in June. Off a two month layoff he was no match for Knicks Go (who is?) in the Whitney, then in a two turn mile like this one at the end of September, he missed by a head to Mind Control in one of the best races of his career. Silver State won six in a row between last October and the Met Mile, and he enters this race second off the layoff on the upside in his form cycle.

(With Life is Good opening as the 4 to 5 favorite there’s no value in a three horse exacta box or even playing Life Is Good over Ginobili and Silver State in my opinion).

(The $0.50 three horse trifecta box has a cost of $3 and appears worth the risk on this high probability exacta box which might pay in the $5 to $8 range).

Race 7: Love, Loves Only You, Audarya and Rougir

Love, Loves Only You, Audarya and Rougir are the main win contenders.

Love gets slight preference among a strong quartet of European runners who stick out against the North American contingent. Love beat last year’s Filly & Mare Turf winner, Audarya, by three-quarters of a length in the Prince of Wales Stakes in June at Royal Ascot, then Audarya beat her by three lengths when she was third in the King George & Queen Elizabeth Stakes later in the meeting. After a third place effort in the Juddmonte International in August, Love came up just a nose shy in a big effort in the Blandford Stakes in Ireland, against females. The other three before that were all against males and sticking to her gender today Love could very well add to her strong 7 for 14 career record under Ryan Moore, who rode her to FOUR straight wins from June of last year through this June.

Loves Only You is the Japanese answer to Love in terms of sheer ability and consistency. With a record of 6-2-3 in 14 races, this five year old mare has run four “A” races in four tries this year. She beat males in February at this 11 furlong trip then went to Dubai and was only a pair of necks from winning the Group 1 Dubai Sheema Classic. Next she won a group 1 race against males in Hong Kong then against some of the best males in the division was second of 13, beaten under a length, in a group two race again. She fires every time and would be no surprise if winning.

Audarya isn’t in much different form as compared to when posting the 17 to 1 upset in this race last year at Keeneland. Last year Audarya won the Prix Jean Romanet then was third in the Prix de l’Opera on Arc day. This year she missed by a nose in the Prix Jean Romanet and was only a neck from third in the Prix de l’Opera, She liked the firm turf last year for this race and will get a similar course this year as well so can’t be ruled out as a contender for even a second.

Rougir won the Prix de l’Opera last month, in a field of 14, and as the favorite on the heels of a pair of near misses by inches in two other prestigious races. She enters this race in the best form of her career and the only question mark is how she may like firm turf as she’s been running mostly on good, soft and heavy ground in Europe. However, top turf stars are just that because they can handle any kind of going so I will not discount her chances just because she is running on dry turf this time.

Love or Loves Only You (whichever is the higher odds near post time) to win at 2 to 1 or more. (Both start at 4 to 1 odds so I think picking one of the two is the right choice).

Box Love, Loves Only You, Audarya and Rougir

(Even though these may be four of the top betting choices near post time, none will be a heavy favorite and with a 12 horse field this exacta box is worth the risk in my opinion).

Love, Loves Only You, Audarya and Rougir over Dogtag

Love, Loves Only You, Audarya and Rougir over ALL over Dogtag

The cost of the exacta above at the $2 level is $8 and the cost of the trifecta above at the $0.50 level is $20 if all 12 horses run. I think it’s worth the risk and could pay big because of Dogtag, likely to go to post at 50/1. Dogtag has been second or third in all five races this year and three of four last year. She fights hard every time even at this level although she’s a cut below the best and if she sneaks into the trifecta or exacta with any of the four contenders winning we could have a nice profit. 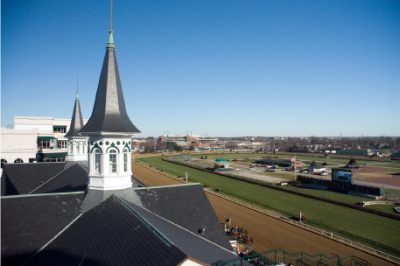