Del Mar Racecourse is a horse-racing track in Del Mar, California, USA. It opened in 1937, at Jimmy Durante Blvd.

1936 – William A. Quigley spearheaded the establishment of the Del Mar Fairgrounds. He achieved his goal with Bing Crosby and founded the Del Mar turf Club on May 6, 1936.

1937 – On July 3, 1937, Bing Crosby (a famous singer) personally greeted his fans at the gate during the opening of the Del Mar racetrack.

1938 –The famous Seabiscuit-Ligaroti had a match race on the track which drew 20,000 to the track and a nationwide radio audience on August 12, 1938. It had a close fight and intense duel, and Seabiscuit, under George (The Iceman) Woolf and 130 pounds, beat Ligaroti and Noel (Spec) Richardson at 115 by a nose.

1942 to 1944 – Del Mar Racing was closed because of the Second World War. It was utilized for training by the United States Marine Corps and as a manufacturing site for parts for B-17 bombers. 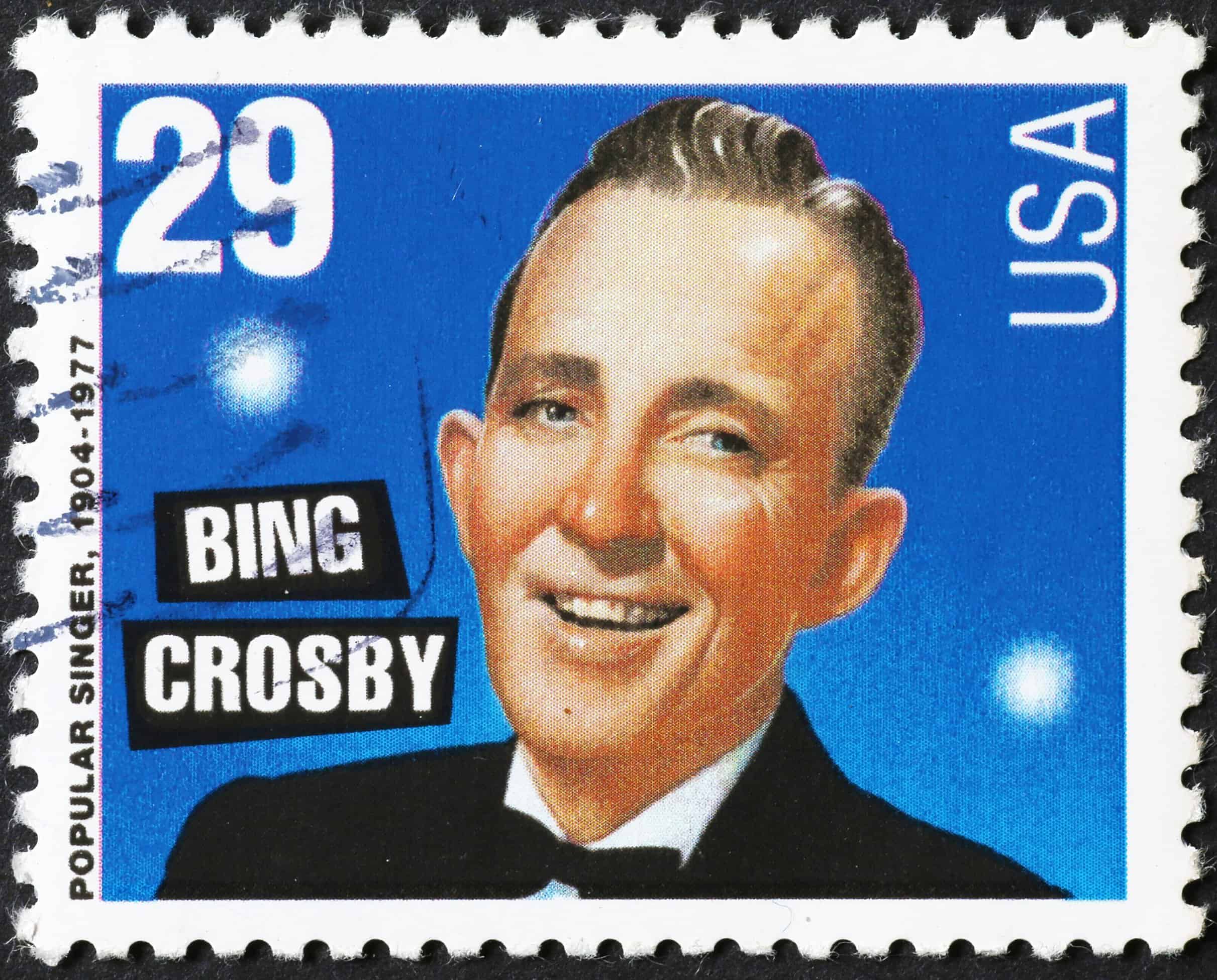 In the late 1940s and 1950s – Del Mar Horse Racing became the Saratoga of the West for summer racing.

1960 – Del Mar racecourse opened its new seven-eighths mile turf course. It has a peculiar diagonal chute starting for 1 1/16 and 1 1/8 miles.

1977 – Bing Crosby had his final visit to the track. Unfortunately, he died later, in 1977, due to a heart attack. Each summer, his legendary music continues to live on, titled “Where the Turf Meets the Surf.”

1990 – The track had a major revamp. The grandstand was replaced.

1991 – The racecourse hosted its wealthiest race to date, the $1,000,000 Grade I Pacific Classic Stakes. It was first won by a top three-year-old named Best Pal.

1999 – Trainer Bob Baffert won all five of Del Mar’s Grade I races. Four of which were ridden by David Flores.

2013 – In March, a vote was to extend the turf portion of the racecourse. Building started later in the year and was completed in time for the 2014 racing season. It expanded the course to 80 feet and softened the curve of the diagonal chute.

2017 – Del Mar Racing had its first Breeders’ Cup in November.

2020 – The meet was held behind closed doors because of the COVID-19 pandemic.

Del Mar is one of the racetracks that created history in horse racing as it continues to do outstanding numbers–30,578 for daily average attendance (1st in the nation) and a record $12,115,024 for daily average handle (2nd nationally). It also crowned a couple of new kings, and in 2006, it received a 42,005 audience, the second-largest crowd in track history. Even in 2010, despite the continuing recession that tightened the businesses, the track still managed to increase the daily on-track body count to 17,906, which hadn’t been seen on the local scene since pre-ITW days. Then, the following year (2011), the track’s Opening Day attendance rose to a single-day record of 46,588.

Track Details and other Facilities 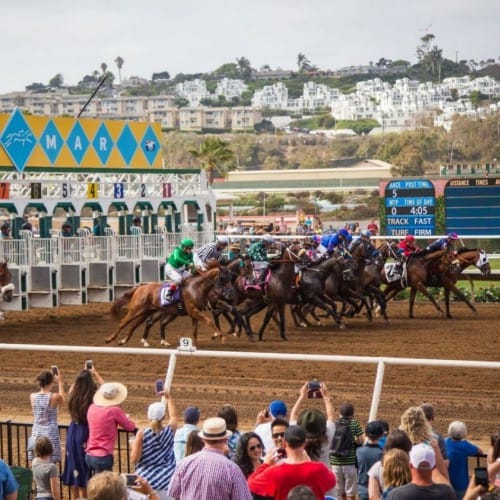 There are over 300 events that take place on the Del Mar Fairgrounds. However, the most well-known are: 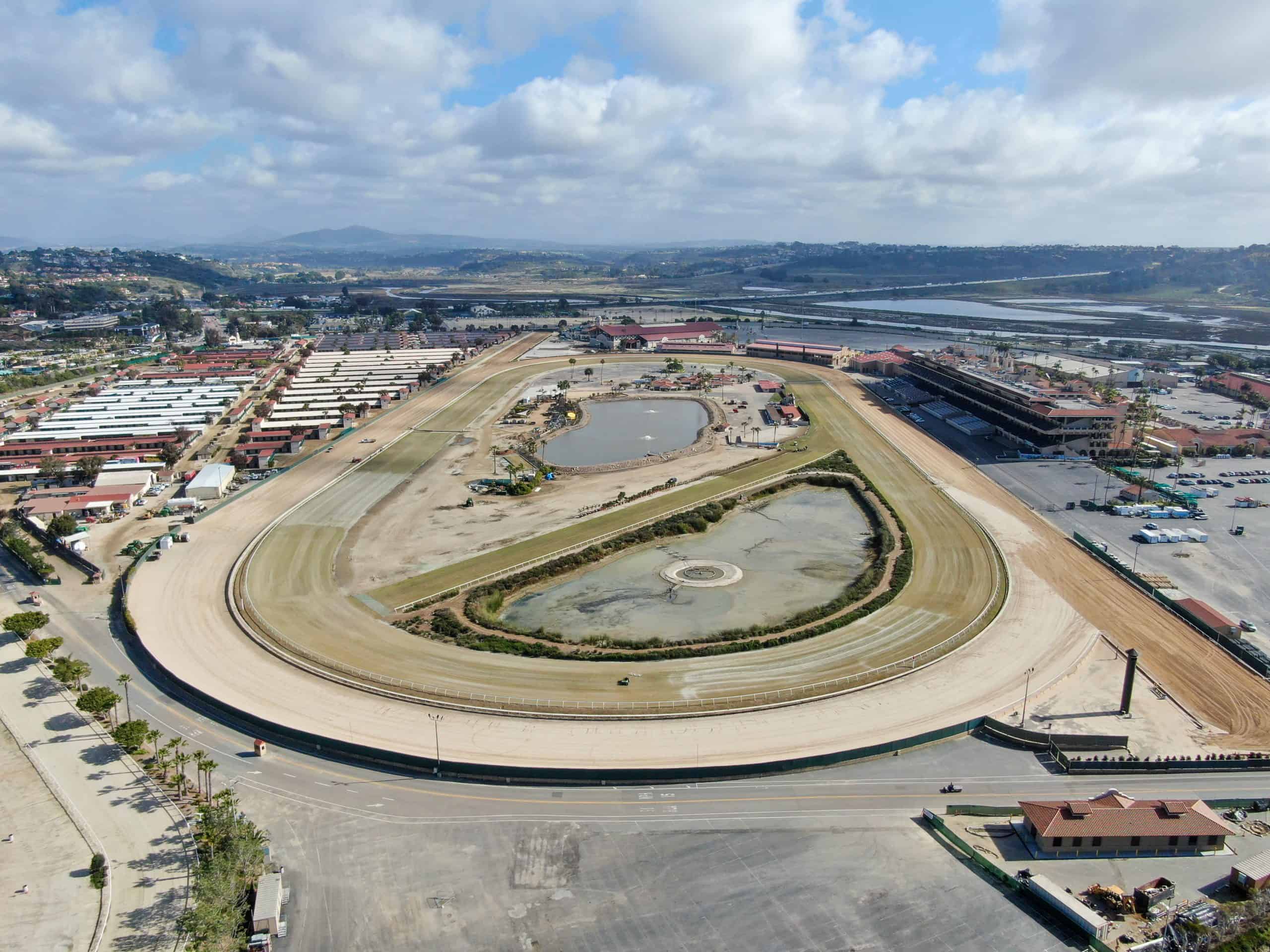 Are you interested in betting now? Why not try our horse racing betting tips, listen to our podcasts, and have higher chances of winning!

You can also check Del Mar entries and results using our AmWager platform for FREE!