Keeneland Race Track is a horse-racing track in Lexington, Kentucky, United States. It opened in 1936, at Versailles Rd.

1936 – It was inaugurated on October 15, 1936, and originated as a non-profit racing–auction entity on 147 acres (0.59 km2) of farmland west of Lexington, owned by Jack Keene. Keeneland Association, Inc. is an equine business based in Lexington, Kentucky. It includes two distinct divisions, the Keeneland Race Course, a Thoroughbred racing facility, and Keeneland Sales, a horse auction complex.

1940 – Electric starting gate was introduced in April for the Spring Meet.

1949 – Keeneland replaced the old wooden rail with an inside aluminum rail for its spring meeting. 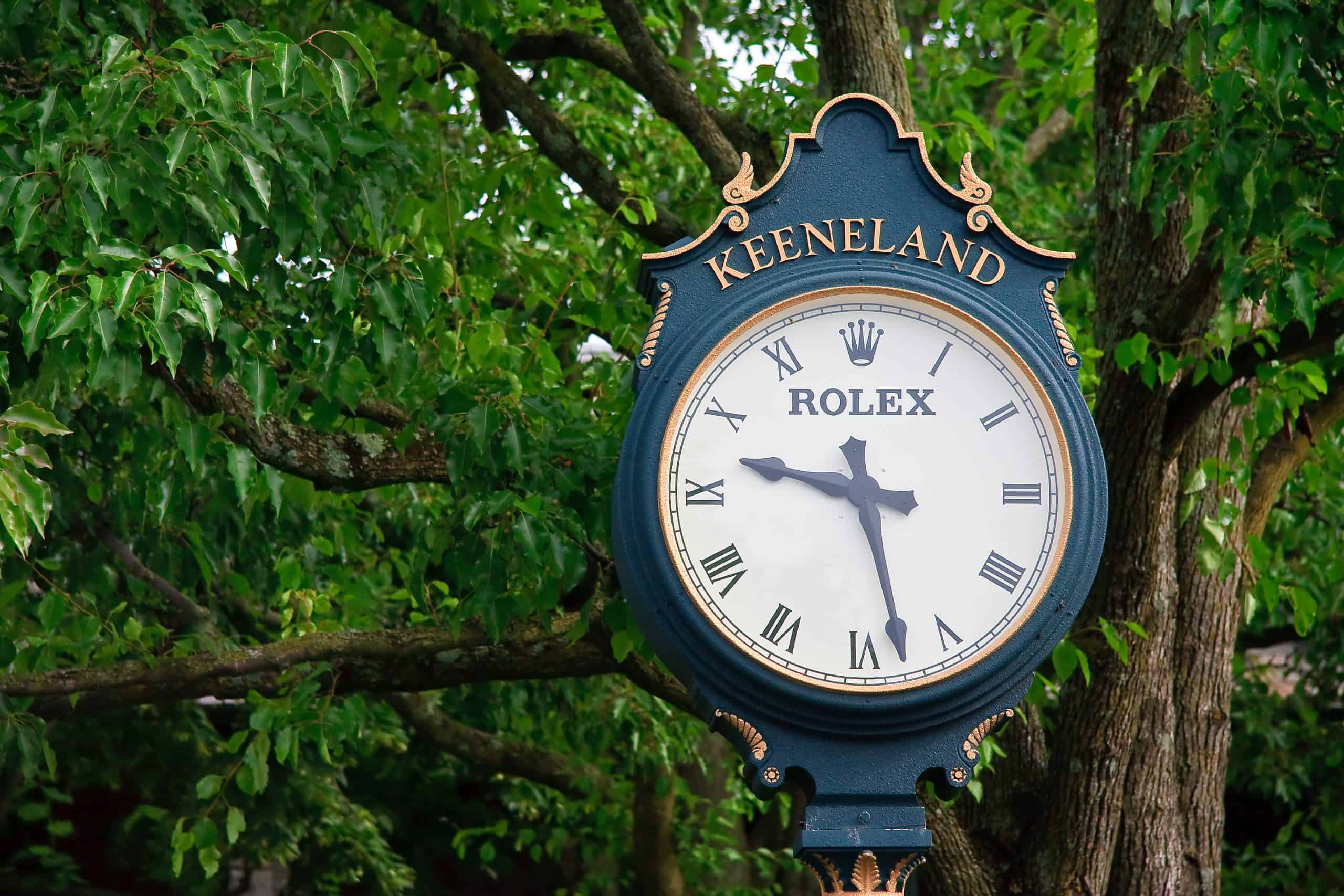 1950 – The box seat area was refurbished in preparation for the 1950 Spring Meet. The old wooden structure was replaced by steel, aluminum, and concrete.

1953 – The Keeneland management enlarged and extended the grandstand for the 1953 Fall Meet. It increased the seating capacity to 3,849 and added a new dining room with 384 seats. The finish line was relocated as the Beard Course ( named to honor Louis Beard) of seven furlongs and added 184 feet of length. It extended the course length from 990 feet to 1,174 feet.

1954 –The film patrol system was introduced and first utilized on April 1954.

1955 – Keeneland installed a five-furlong training track which opened in September 1955.

1956 – the main track underwent a complete renovation, costing $150,000, to enhance the surface and sub-surface drainage.

1961 – An alphanumeric message board was installed at the ground level in front of the infield tote board for the 1961 Spring Meet in April.

1963 – Keeneland management established an alternate finish line at the sixteenth pole for the 1963 Spring Meet.

1967 – In April, closed-circuit TV monitors were installed in the grandstand and clubhouse areas.

1976 – The original wooden grandstand since the inauguration of the track was replaced with a new section of concert and steel in preparation for the 1976 Fall Meet.

1980 – Keeneland racetrack established a walking ring at the Sales Pavilion to allow buyers to scrutinize the horses before entering the auction ring.

1985 – The management installed a turf course and opened the new grandstand entrance beside the paddock and walking ring.

1986 – It was recognized as a National Historic Landmark for its role in horseracing sport’s growth and revitalization in Lexington.

1990 – Keeneland originally raced from Tuesdays to Saturdays. However, more people could attend on Sundays than on Tuesdays, and the competition from other tracks and other entertainment venues motivated them to request for approval of racing on Wednesdays through Sundays on June 1990.

1991 – The Keeneland was approved for its new racing schedule (Wednesday to Sunday) and held its first Sunday meeting in the spring of 1991.

2003 – The 2003 movie Seabiscuit filmed most of its scenes at the Keeneland racetrack because of the racetrack’s “retro feel”.

2005 – Keeneland also became the filming location of the 2005 movie Dreamer.

2006 –  Keeneland replaced the dirt surface with a Polytrack surface and reshaped the main track over the summer of 2006 in preparation for the fall race meeting.

2009 – The Horseplayers Association of North America introduced a rating system for 65 Thoroughbred racetracks in North America, and Keeneland was ranked #1 of the top ten tracks. It is also known for its reference library, which is open to the public and devoted to thoroughbred horses. It has a notable collection of books (The Blood-Horse of January 6, 1940) and numerous photographic negatives.

2010 – Several significant scenes of the 2010 movie Secretariat were also filmed at the Keeneland race track.

2014 – Keeneland racetrack restored its dirt racing surface during the summer of 2014. 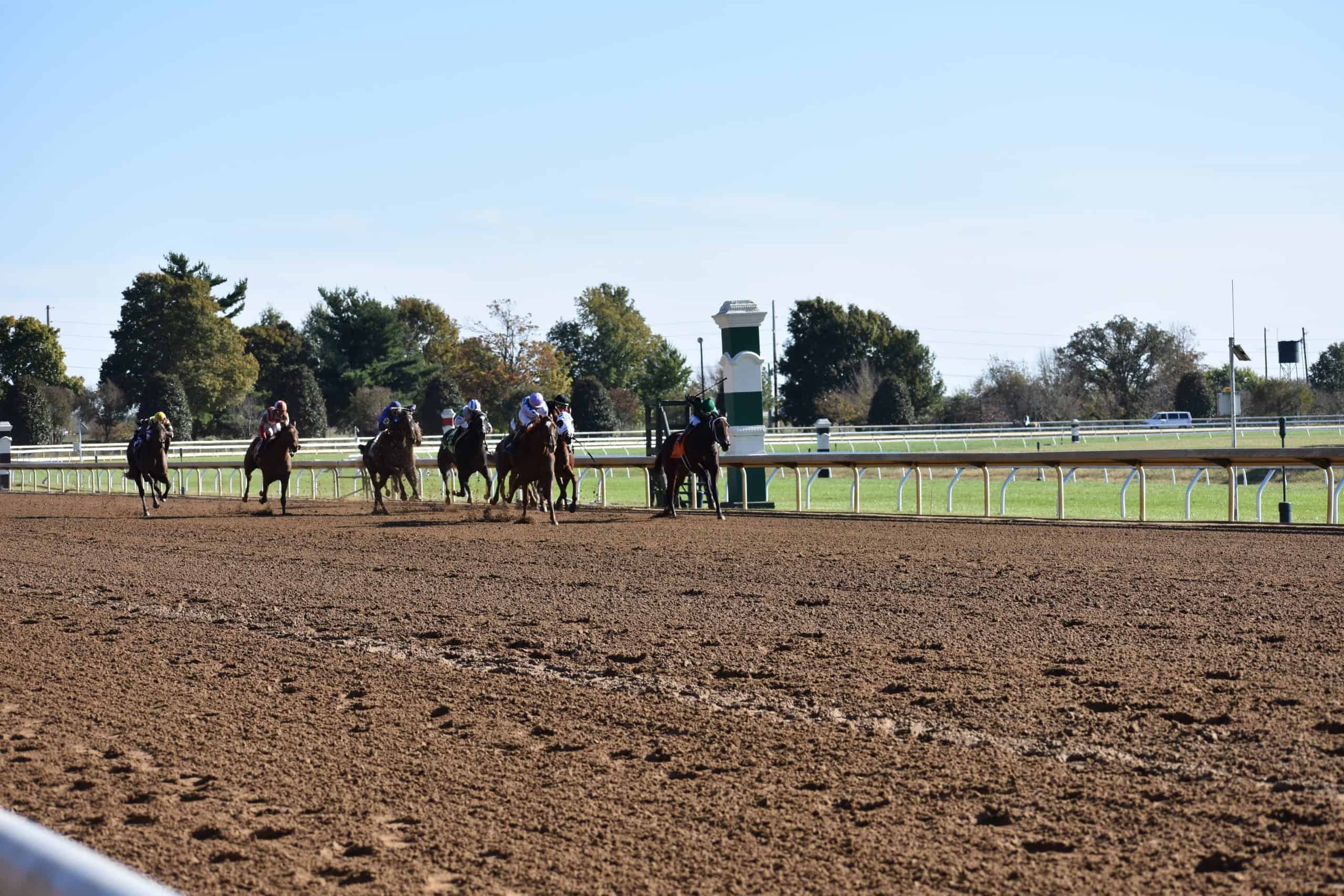 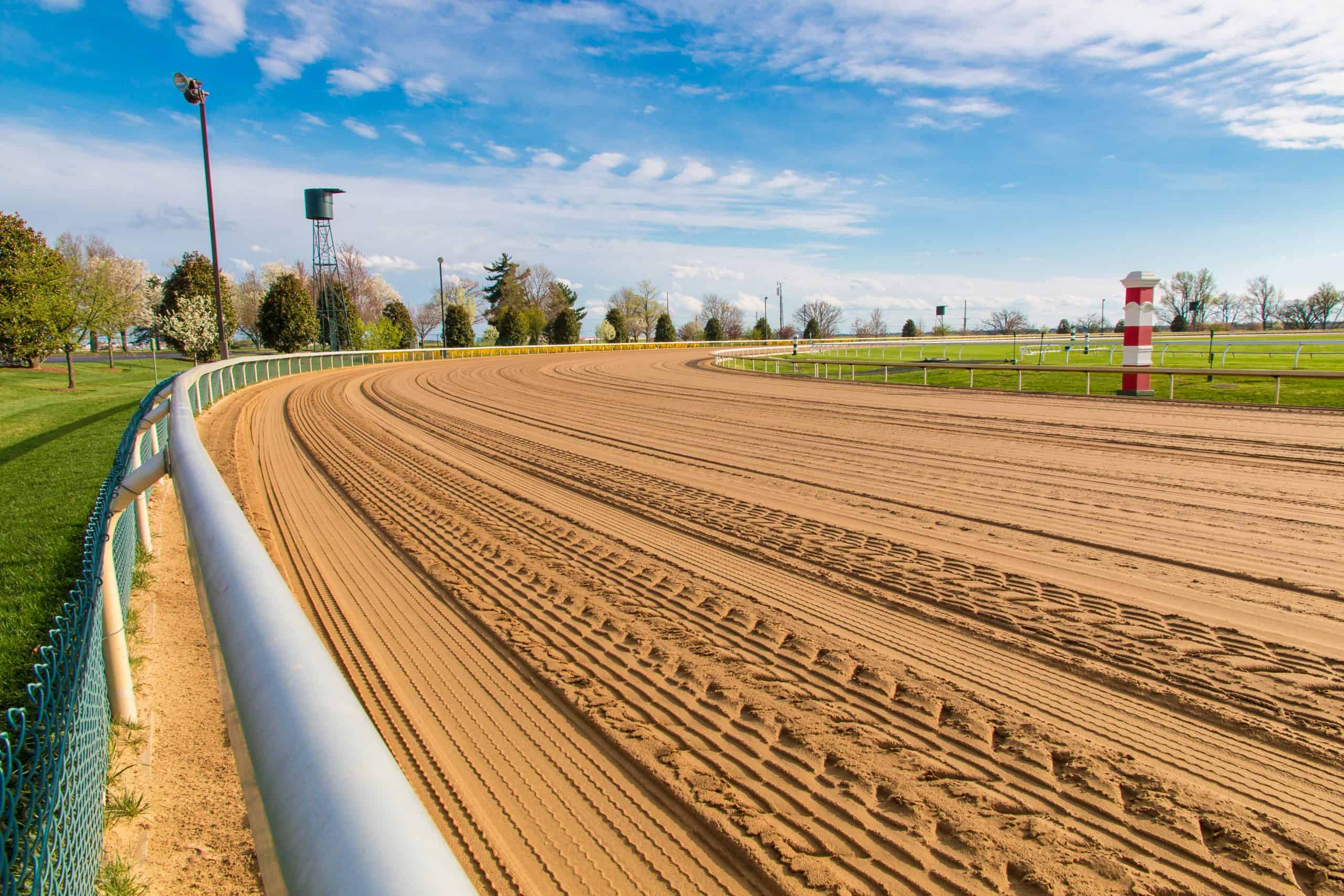 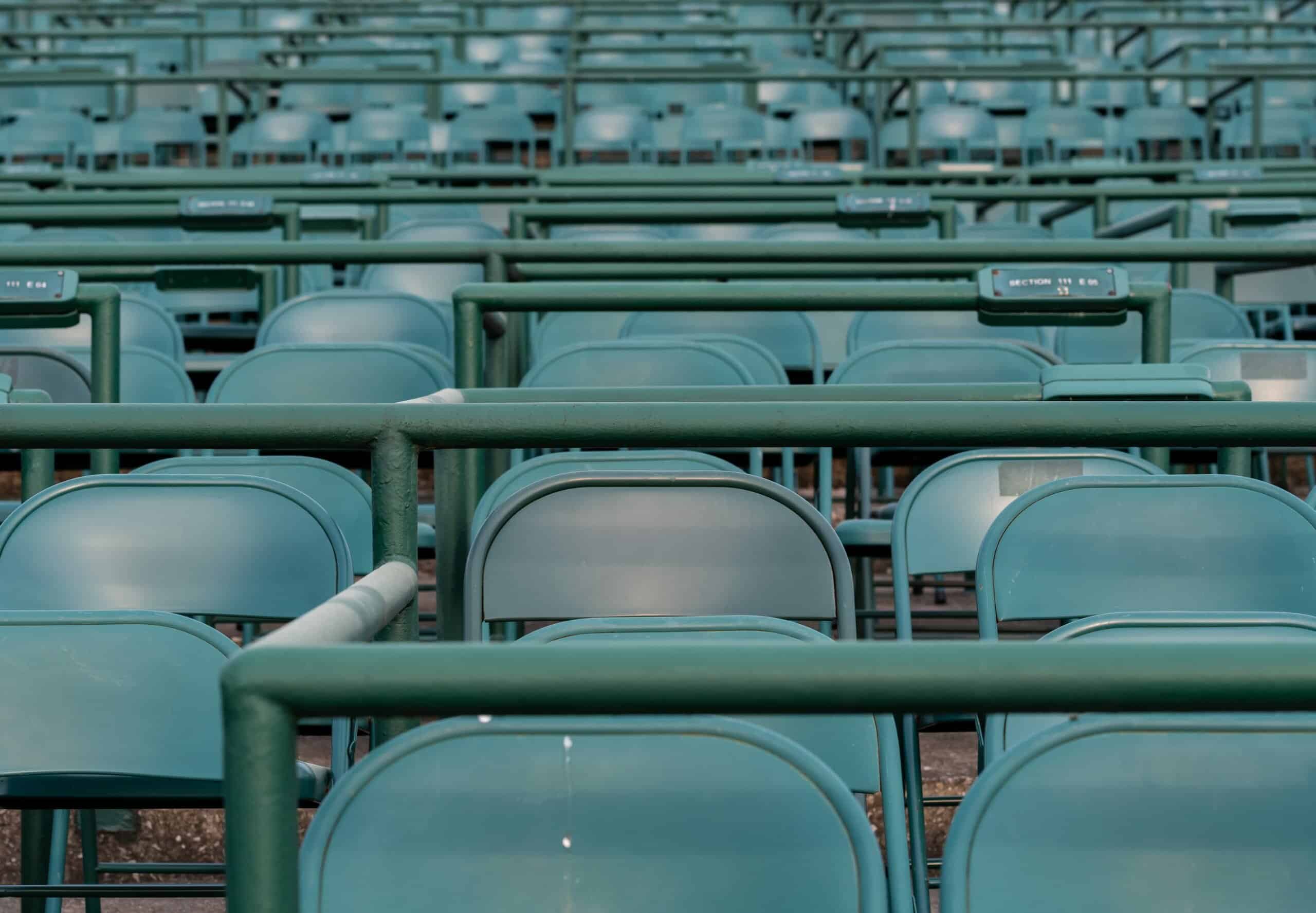 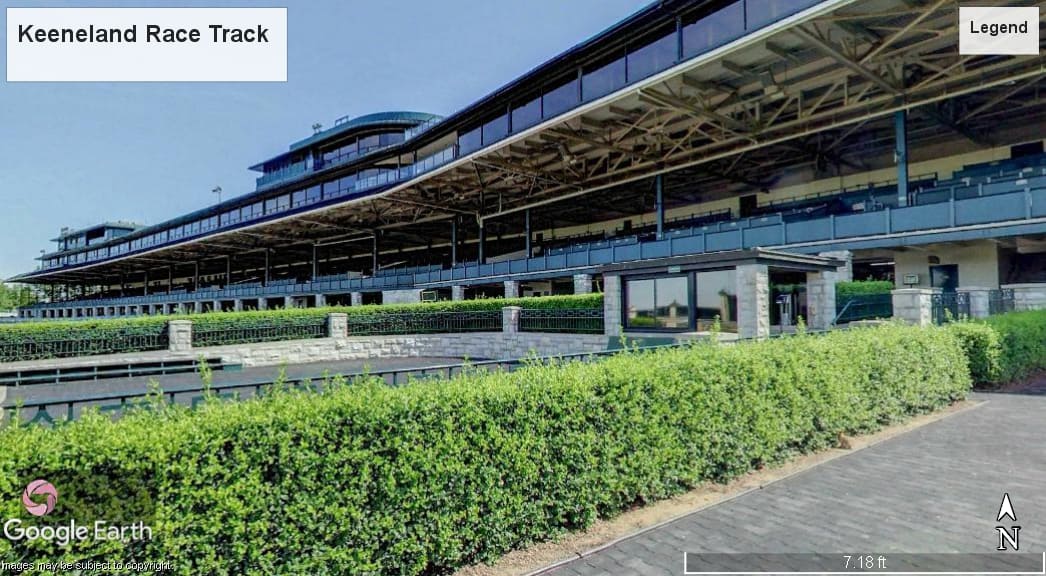 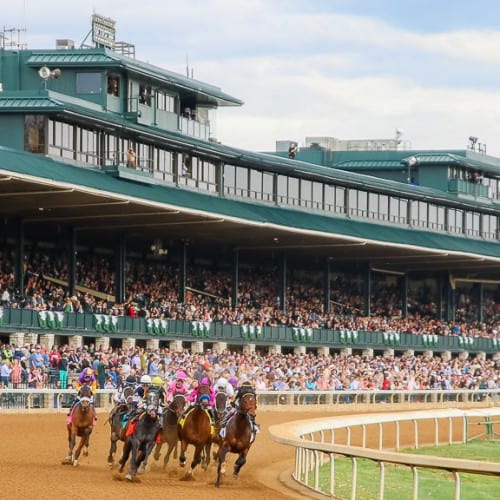 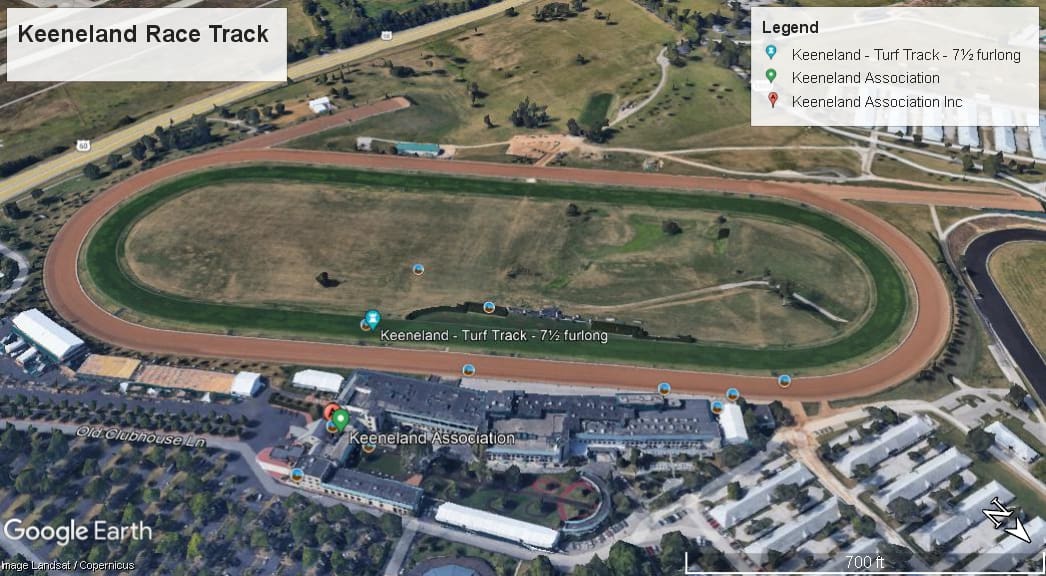